Updates on 'The Lost Enemy'

Published and ready to ship!

The creative writing project that I worked on for many years, The Lost Enemy, has come to fruition and it's been a wonderful learning experience. This originally started as a collection of poems, which was supposed to accompany one of my piano CD's, but I added a lot more to it and the project eventually blossomed into a novel-length story. I then converted these poems into prose, which left me with a book that not only contained a 180-page story but also a very unusual and a rather archaic style of writing. 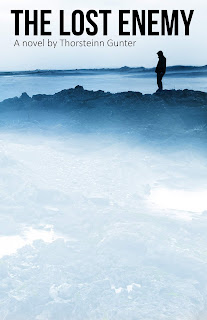 A few people have asked me, just out of curiosity, why I decided to finalize this story now, and why I decided to publish it. The events leading up the time when I finally started "cracking down" on the project are rather amusing, considering I was somewhat careless when it comes to displaying this product on my website...

A few months ago I finally finished writing most of The Lost Enemy, and I already knew what order the chapters were in and how the events were to be portrayed in the novel. The only "snag" was that the story wasn't quite polished, and there were multiple changes that needed to be made with regard to the content.

As an example (and don't worry, there are no spoilers here!) there is a character in the story who becomes pregnant. In the original draft it didn't take long before this character became aware of her own pregnancy. The problem was that I absolutely had to make the story unfold so that she doesn't discover this news until very much later (this was due to a "hiccup" in the series of events, which was brought to my attention by one of my colleagues).

The point here is that The Lost Enemy was neatly displayed on my website, being advertised as a "completed" novel, a book that was for sale and ready to be purchased. Most people had no idea that I had even written anything, since the primary function of my business is music and not creative writing. So I didn't worry about this too much, and I figured that if anyone purchased the product I could just "fix it up real quick" and ship it off to the person who bought it.

Well, lo and behold, a random woman that I met at a concert one day stumbled on my website and decided to buy the book. I noticed this a few days after she made the purchase, and--as anyone can imagine--my first thought was, Well, I guess I better finish polishing this up.

So that is how I ended up finalizing the story. I guess the "funny" part is that the process of fixing it up took several weeks, with many all-nighters that involved hours of me sitting at the computer and changing/improving the story.

The woman who ordered that first book finally got her copy (along with a free CD, as a "thank you" for patiently waiting while I scrambled to finish the project). And, to my excitement, I've sold fifteen additional copies after that!


Kudos to a wonderful printing company

I feel somewhat fortunate that we live in an age now where people can self-publish pretty much anything. You can now self-publish a book, an album, a film, or just about any other form of media. So I self-published The Lost Enemy using a company called 48 Hour Books (you can check out their website here) and they were fantastic. I was so impressed with how professional the final product was when I received my first shipment. So, as far as I'm concerned, if you want to get a book printed--that's where you need to go! Just a heads-up, if you've never published your own book before: ISBN numbers are not cheap.

There's an interesting phenomenon that takes place during the editing/revision process, when it comes to writing and publishing a book. This was another learning experience. When you spend too much time on a creative project, you stop noticing mistakes. This is a classic case of "you can't see the forest for the trees" concept, if you'll forgive the cliché expression. I spent so much time reading and re-reading this novel that there were several (four, to be exact) glaringly obvious typos that I always failed to notice, regardless of how many times I read it. I would like to have hired an editor to iron out this common problem, but this would mean more money out of my pocket.

This resulted in the first batch of books being printed with four typos that bugged me to no end, along with some formatting issues that I realized needed to be changed. So after selling a bunch of copies with the errors in them, I ordered a second set with the improved version. This "second edition" also has 35 chapters instead of 34. The additional chapter resulted in my decision to split one of the chapters in two, because I felt it was too long.


A second book? This remains to be seen...

I was delighted to sell even a small handful of copies, primarily because this was an experiment and a hobby that didn't involve the stress of pursuing it as a "career", and there was no pressure to meet any kind of deadline. I've been asked a couple of times if there will be a second book, and this all depends on whether there will be more sales, and whether I start hearing demands for one. Either way, one thing I will admit is that The Lost Enemy is a deeply personal book that I've worked on for a long time, and now it's rather surreal to not have a creative writing project to work on (other than these fun blog posts).

Completing this project was definitely one of the most satisfying and therapeutic things I've done, and when I'm asked if it was worth the time and effort, it's an easy yes. There are few things in life that are as euphoric as being immersed in such a colossal project with no restrictions, no rules, no time limit and all while being fully aware of the endless options I had at my disposal. And as for the question of whether I end up writing a second book--well, I wouldn't be surprised ;)

Posted by thorsteinngunter at 9:15 PM

thorsteinngunter
I write solo piano pieces and perform regularly throughout Chico and northern California. I am also a music teacher and have the privilege of instructing over 30 students, young and old :)